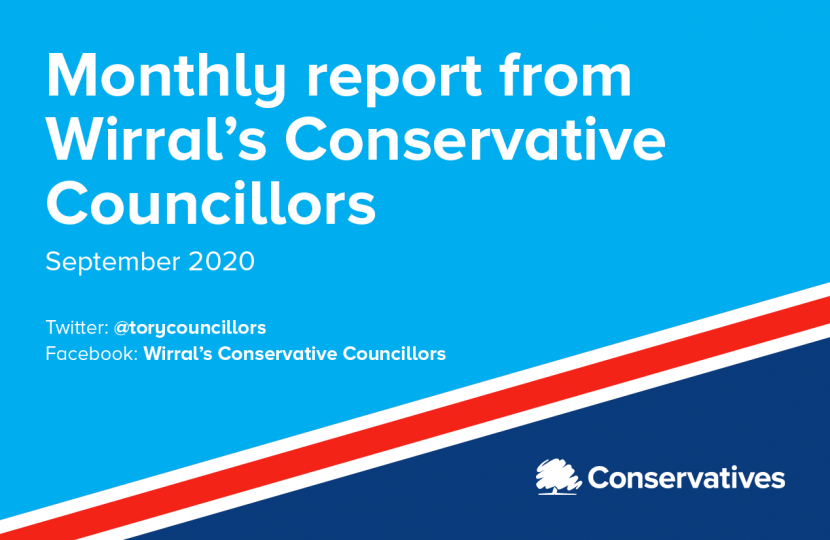 We were very sorry to learn of the deaths of Councillor Geoffrey Watt, after a short illness, and former Councillor, Honorary Alderman David Elderton. Both were long serving, dedicated councillors representing West Kirby & Thurstaston Ward and will be much missed. We send our condolences to Geoffrey and David's families, not least Anne and Barbara.

Across the Borough, the Coronavirus pandemic continues to disrupt the lives of our residents and many council services. Due to the rising numbers of Covid-19 patients being admitted to hospital across Merseyside, including Wirral, the Government announced a temporary halt, and in some cases a reversal, of the easing of some of the terms of 'lockdown'.

The Leader and Deputy Leader of the Conservative Group, Councillors Ian Lewis and Lesley Rennie, have attended weekly meetings of the Borough's new Outbreak Management Board, comprising some councillors, senior officers and health professionals in response to local measures to try to limit the spread of the virus.

In spite of the restrictions in force, we have continued to welcome new members to the Party and are grateful for the continued support of the Conservative Area Management Executive for Cheshire and Wirral, led by Kate Vaughan, for their ongoing support - most recently with a campaign to recruit current and former members of our Armed Forces to our Party.

September also saw the first Annual General Meeting of Wirral's Conservative Councillors to be held online. Like many people, we are getting the hang of it and only a few of us forgot to 'unmute', or, in some cases, mute!

The following councillors were elected as Group Officers:

We have also continued to meet with the other political groups to confirm the new way in which the council will be run from now on. These changes, agreed at the Council's Annual Council meeting, scrapped the Council's 10-member Cabinet. Instead, decisions will be made in public, after debate, in committees.

Annual Council, postponed from May, was held on 28 September to (re)elect Cllr. Tony Smith as Mayor of Wirral and Cllr. George Davies as Deputy Mayor, until the next Annual Council, planned for May 2021.

At this meeting, Councillor Pat Hackett's tenure as Leader of the Council ended, following his resignation as Councillor for New Brighton. We send our best wishes to Pat, and Elaine, and thanks for all they did during the most difficult year our Borough has faced.

Conservative Councillors were elected by the Group to chair the following committees:

Our Spokespeople elected to serve on the remaining committees are:

Also at this meeting, a majority of councillors voted to accept most of the recommendations of the Independent Remuneration Panel on allowances. The exception was to reject a proposed 5% increase in the basic allowance paid to councillors which has not been increased since 2010.

During September, and while we continue to adapt to not meeting in person, Wirral's Conservative Councillors have:

Met with Wirral Chamber of Commerce: to discuss the support that is available to protect jobs and apprenticeships, including national schemes such as the Job Retention Scheme, suspension of Business Rates or the Kickstart programme to support 16-24 years into work.

Attended a briefing on town centre redevelopments: reversing long-term decline of many of our town centres is a priority for the local Conservatives in Wirral. With Government support for reversing this decline amounting to £3.6 billion nationally, including money for Wirral, we met with the Council's Director for Regeneration to discuss the latest projects in Liscard, Moreton, New Ferry and Birkenhead and, further along, West Kirby and New Brighton.

Undertaken media training: including changes to media ownership, guidelines and social media with our Party's Head of Regional Media.

Local councillors are continuing to survey residents, and write to them about concerns as diverse as trees, green belt, beaches and housing. For example Councillor MIke Collins has been working with Merseyside Police on nuisance speeding.

Following the Town Hall's failure to consult residents in Wallasey, councillors there launched a campaign in September to tell people about plans for a cycle route through the town. Read more here.

Having been promised that 30,000 households and local businesses would be consulted, many people were rightly angry that this had not happened and that significant changes to their neighbourhood could be made without them having their say.  Thank you to to everyone who has so far been in touch with us on this issue.

Surveys to 10,000 residents have also been sent to people living in Seacombe, Leasowe, Moreton, New Brighton and Wallasey. Our volunteers including Debbie Caplin (Leasowe and Moreton East) and Darren May (New Brighton) are working their way through the responses.

That's our Group's report for September. If you have any questions, comments or suggestion, please contact the councillor listed or, if you'd like to get involved in our campaigns, fill in the form below.

Can you help the local Conservatives campiagn for our area? Please tick...