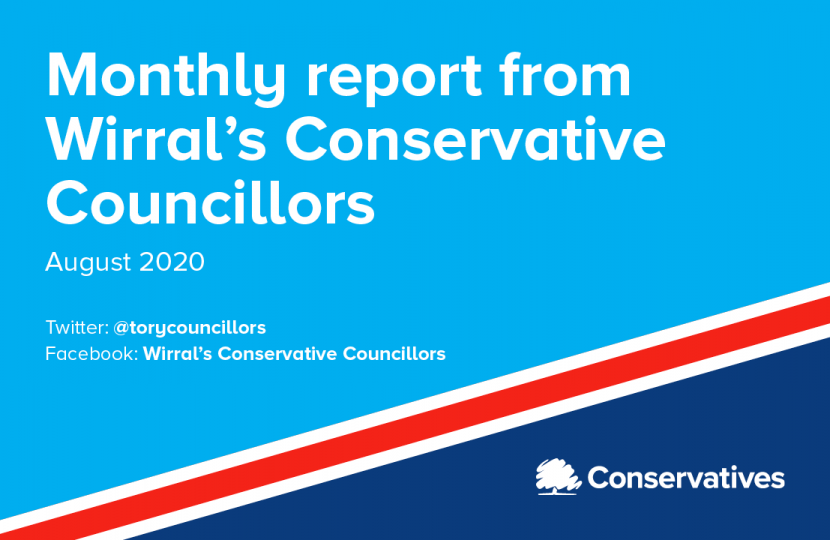 As many council services return, the Government has continued to provide money to support residents, voluntary groups and businesses in our Borough. So far, Wirral Council has received £100 million of additional cash. The Leader and Deputy Leader of the Conservative Group, Councillors Ian Lewis and Lesley Rennie, have continued to meet with the other political groups and senior officers to ensure this money is being used to support those most in need.

We have also met with the other groups, ahead of the Council's Annual Meeting in September. At that meeting, and as a result of Labour losing their majority in the Town Hall, the current one-party (Labour) Cabinet will be scrapped. Councils were originally encouraged by Tony Blair to introduce 'Cabinet-style' decision making to speed up decisions.

As we have seen in Wirral, that has simply meant bad decisions have been made more quickly, and without proper scrutiny. The best example perhaps being Labour's plan for a 'golf resort' on Green Belt land in Hoylake. This month, the Conservative Group, on a motion proposed by Councillor Jeff Green and seconded by Councillor Mike Collins, reaffirmed our opposition to this policy.

Instead of a Cabinet of just 10 councillors, decisions will, from October, be made by all-party committees with full discussion being taken in public. Subject to a vote at the Council's AGM, we hope the Conservative Group will chair the Audit & Risk; Children's Services; Regulatory and General Purposes and Tourism, Communities, Culture & Leisure committees.  The only way Labour will have a majority on committees is if they gain the two extra seats they need at the next elections in May 2021.

During August, and while we continue to adapt to not meeting in person, Wirral's Conservative Councillors have:

Called in Labour's decision not to rake Hoylake Beach and remove the grass from the sands. Sadly, when it came to the vote, and with the help of the Green Party, Labour won by 8 votes to 6 not to rake the beach. You can read the comments by Councillor Andrew Gardner, Tony Cox and others here.

Established a review of the waiting list for allotment plots in the Borough. This will be led by the Chair of the current Environment Scrutiny Committee, Councillor Tom Anderson and will include evidence and views from the Wirral Allotments Society. You can read more on that here.

Helped to introduce Protection Orders for West Kirby and Wallasey. The new Protection Orders cover Cubbins Green and the Dips, following anti-social behaviour at both locations at the end of May. The Orders last for two years and you can read comments by Councillor Ian Lewis here.

August saw us launch our campaign for Wirral Council to start building modern council housing again on brownfield sites. More new council houses have been built in the 10 years since Labour lost in 2010 than in the previous 13 years when they were in Government but, sadly, none in Wirral. Read more here.

In our Borough, there are 9,000 families on the housing waiting list. And, as we saw when the Government ordered the council to act at the start of the pandemic, accommodation was quickly found for 120 homeless and rough sleepers in our Borough. We don't want things to go back to how they were. If you agree, please sign our petition to the Council's soon-to-be established Housing Committee.

Now that campaigning is slowly and carefully resuming, our volunteers delivering newsletters, starting in Pensby & Thingwall Ward, with our candidate Dr Ivan Camphor, and in Greasby, Frankby and Irby Ward.

That's all for August. The Annual General Meeting of the Conservative Group takes place on 7 September and our next report will be at the end of September.

If you have any questions, comments or suggestion, please contact the councillor listed or, if you'd like to get involved in our campaigns, fill in the form below.